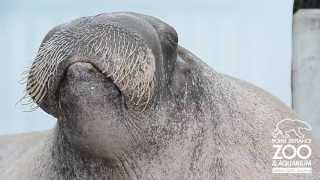 At 18:15 last night I learned that the 2014 Walrus Talks were happening at 19:00. I had heard of the speaker series before, but never participated. My intellectual curiosity is generally insatiable so I called the box office to inquire whether or not empty seats remained for the show. As it was such short notice, they were unsure of the status. I suggested to my roommate that we take a chance. After brushing teeth and changing into fresh shirts we were off. The crowd spilled out the doors of the Jack Singer Concert Hall as we approached. The chilled air was no deterrent. The Box Office up was long and so Pat and I took our place in the queue. It was less than ten minutes before the event was scheduled to start and the lobby was still crammed with energy. With each passing minute, my desire to find a way into the auditorium intensified. It was a tame mini-adventure. As the line inched forward I remained optimistic. My positive mindset was rewarded within minutes as a middle-aged lady held out two paper tickets and inquired, “Do you need tickets?”. I was quick to reply. I flipped open my wallet to complete an impromptu transaction. She was not interested. “Pay it forward,” she smiled through bright teeth. Pat and I didn’t have to be told twice. We thanked her repeatedly as we vacated the box office line and were ushered into the lobby of the concert hall. Like we had just pulled off an epic prank, Pat and I shared a high-five undertoned with a ‘hell ya’ and found our seats on the floor. Excited enough that we passed the bar.

Minutes later show commenced. The pace was fierce, but welcomed. Although I’m certain that each of the speakers could have held a willing audience captive for the better part of an hour they were each only allotted seven minutes of prose, song or rhyme to communicate their message. Instead of offering a chronological synopsis I share some of the highlights, key takeaways and general themes.

Les Stroud – Although I have only watched snippets of Survivorman and had no idea that his main talent is music, Les Stroud was my favorite presenter. His message was concrete. At the end of his remarks, Les had imparted two key action items. The first is to be in nature for a minimum of ten minutes each day. While urban life offers great opportunity and a high standard of living, the absence of nature in many peoples daily rountines removes us too far from so many foundations. A simple interlude to stand in a park a breath fresh air should do the trick. The second recommendation was to embark on a thirty day trash challenge. He suggests removing all garbage receptacles from your household for 30 days and see how it goes. I have yet to try, but can imagine that the ensuing impact on my consumption decisions would be quite profound.

There is a tie for this honour. On message, Diane Francis takes the cake. In a book appropriately titled: Merger of the Century, she advocates that a Canada – US union is the only route forward for the Canadian nation. Her reasoning is one of both convenience and necessity with the strong driving force being a lack of capital and military might. On content and delivery, the most contentious presentation was Joesph Boydon. He weaved a hypothetical government administration with each of the evenings’ speakers slotted into a range of roles. For example, he and Shad would be co-Prime Ministers. As his time waned he made multiple pointed comments about the environmental impact of approving the proposed Northern Gateway pipeline and even called out Enbridge, an event sponsor on more than one occasion. I don’t think I was only audience member to squirm a bit in my seat.

Although it may seem cliché, Neil Turok’s talk on the future of quantum physics left me in awe. My capacity to comprehend quantum physics is non-existent at best so when coupled with a seven minute time limit, there was little chance I was going to gain much insight from Neil’s talk. That said, I made serious attempt to digest his every word. At his conclusion, one statement in particular struck me. Neil proposed that: The digital age that we are currently in will soon be replaced by a quantum age. I had never contemplated this. In my mind, the proliferation of new and improved technologies was indeed exponential, but remained restricted to the digital realm.   A Google search marathon will hopefully shed more light on the true gravity of the prediction.

Speakers – Although each individual speaker hails from a different background with varying motivations and messages, the unifying factor was a shared caliber of drive, expertise and oratory skill. Each excels in their own areas of interest and experience and were adept in communicating that. Indeed, the overall quality of the presenters was excellent.

Audience – Like the speaker line-up the talk attendees were from all walks of life as well. I met several interesting and engaging people during the reception that followed the talk.

Safe to say that I left the event buzzing.

Check out the speaker profiles and video of the event.

Its in my calendar for next year!